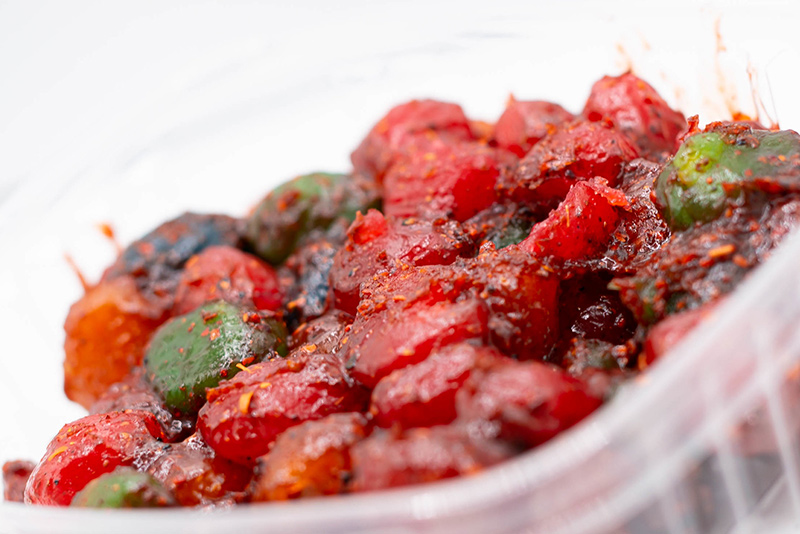 Chamoy is a tasty Mexican seasoning, dip, or sauce that is used to flavor grilled meats, vegetables, drinks, and to top nachos or in our case to flavor our gummies and drinks. Although chamoy is a characteristic of Mexican cuisine, it was first created in Asia and then imported and adapted by Mexico.

Chamoy began in Asia as a salty, dried apricot snack. In China it was known as see mui. In Japan it was called umeboshi which is a pickled tart plum or apricot. Chamoy was transformed into a sweet and tangy sauce that is typically served with chilies once Asian immigrants started arriving in Mexico. In Mexico, Chamoy underwent a number of changes before becoming what it is now. Originally, chamoy was a tiny, sour apricot that was dried and salted. Nowadays, chamoy is offered as a sauce and a spice. Today, chamoy is often manufactured as a dipping powder for lollipops or used to cover gummy candies.

What are todays ingredients for Chamoy?

Usually, dried chiles, lime juice, and fruit are used to make chamoy. Although it may be made at home, chamoy is most frequently purchased already mixed with candies or prepackaged for rim dip. In addition to being available in paste and powder form, chamoy is frequently used with candies and confections to add a spicy tangy kick. Apricot, plum, and mango are a few of the foods that may be used to produce chamoy. You must brine or salt cure the fruit before making chamoy. You may separate the solids from the liquid once all of the fruit’s liquid has been removed. Chamoy gains acidity from the lime juice, which wonderfully balances the fruit’s sweetness. Chamoy has a flavor similar to an Asian sweet and sour sauce because to the addition of fruit brine, chilies, and lime juice. But chamoy is spicier and has a richer taste.

To give chamoy its spicy taste, chili powder is added to the liquid created during the curing process. Chamoy is sometimes mistaken with Tajn, another well-known Mexican condiment, since it contains chilies. The primary distinction between Tajn and chamoy is that Tajn is a brand whereas chamoy is a type of food. Another distinction between chamoy and Tajn is that whereas Tajn is typically offered as a powder made of lime, salt, and chili powder and chamoy is typically consumed as a sauce. Chamoy has a distinctive sweet and spicy flavor because it is fruit-based which gives it a pleasant, citrusy taste while the chiles give it the spicy kick.

Popularity of Chamoy in Candy

Candy makers once relied on cinnamon to give sweets a kick, but as our taste buds get more adventurous, flavor makers are expanding, helped in part by the growth in popularity of spicier tastes in the early 2010s, such habanero and sriracha. Candy makers turned to chamoy which provides a salty, sweet, sour, and spicy kick. Chomis Gomis is proud to hand make chamoy covered candy locally in Los Angeles with lots of amazing flavors like peach, strawberry, watermelon and pineapple. Give your taste buds a jolt of flavor with chile covered candy. Enjoy our chamoy gummies with your friends and family anywhere using our sealable baggies.

Select the fields to be shown. Others will be hidden. Drag and drop to rearrange the order.
Click outside to hide the comparison bar
Compare
Shopping cart close